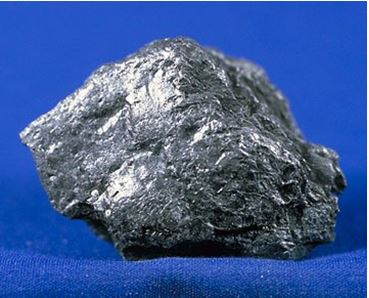 Graphite derives its name from the Greek word "graphein", which means to write. The material is generally greyish¬ black, opaque and has a lustrous black sheen. It is unique as it has properties of both a metal and a non¬-metal.

Graphite is a form of elemental Carbon, the other two being Coal & Diamond. Pure graphite is a mineral form of the element carbon (element #6, symbol C). It is one of the four main natural forms of carbon along with coke, coal, anthracite and diamond. Graphite is one of the most versatile non-metallic minerals in the world.

Graphite is an excellent conductor of heat and electricity. It has the highest natural strength and stiffness of any material; it maintains its strength and stability to temperatures in excess of 3,600 °C. It is one of the lightest of all reinforcing agents. It also has high natural lubricity, and is chemically inert with a high resistance to corrosion.

Graphite is an excellent conductor of heat and electricity. It has the highest natural strength and stiffness of any material; it maintains its strength and stability to temperatures in excess of 3,600 °C. It is one of the lightest of all reinforcing agents. It also has high natural lubricity, and is chemically inert with a high resistance to corrosion.

In nature, graphite is found usually in mechanical association with impurites like felspar, mica, quartz, pyroxene, rutile, pyrites, and apatite. It forms as veins and disseminations in metamorphic rocks as the result of the metamorphism of organic material included in limestone deposits. It is an extremely soft mineral and it breaks into minute, flexible flakes that easily slide over one another. Graphite is the only non-metal element that is a good conductor of electricity.

Graphite is listed as a top ten critical mineral by the British Geological Survey (BGS) and is deemed higher risk than cobalt, lithium, copper and uranium.

Some of the Uses of Graphite 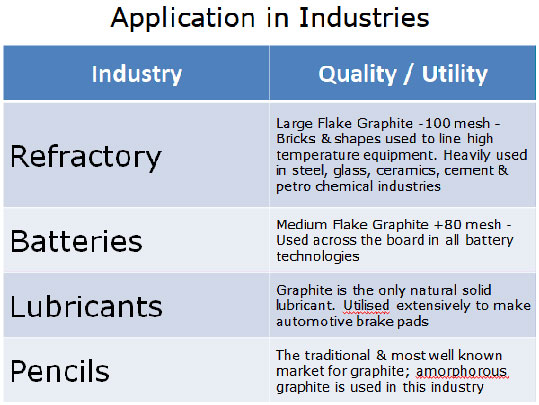 Graphite is a solid material, it is known as a dry lubricant. This is useful in applications where “wet” lubricants, such as oil, cannot be used.

Natural graphite is used mostly in what are called refractory applications. Refractory applications are those that involve extremely high heat and therefore demand materials that will not melt or disintegrate under such extreme conditions. It is used to make brake linings, lubricants, and molds in foundries and also used for cleaning molds in foundries. Also, a variety of other industrial uses account for the remaining graphite consumed each year.

Interest in graphite is increasing in large part because lithium-ion batteries, which are used in everything from phones to modern vehicles, are becoming more and more common. Graphite is a key component of those batteries, and as their use increases, graphite production is only expected to rise.

New applications have the potential to create significant, incremental demand growth in the future

(Each hybrid electric car uses about 22 pounds of graphite, while a fully electric auto uses about 110 pounds.)

Its Key Role in the Green Technology Economy

In today’s world, graphite is considered a key, strategic material in the emerging green technology economy (also known as the Carbon Age) that includes advances in energy storage, electric vehicles, photovoltaics and electronics from smartphones to laptops.

As the green technology economy grows, demand for graphite is expected to outstrip supply over the next decade. For just one market – electric vehicles – estimated demand by 2020 would exceed more than is produced globally today (China is by far the world’s No. 1 graphite producer). For example, there is up to 10 times more graphite in a li-ion battery than lithium.

Feeding the demand in future will be technology grade graphite needed for the burgeoning green technology economy. The lithium battery industry alone is projected to grow between 30 percent and 40 percent, with 20 percent annual growth in the electric vehicle market (as much as 30 kilograms of graphite can be found in some electric cars).

With demand for large flake graphite growing, it is projected that 25 new 40,000 tonnes graphite mines per year will be needed worldwide by 2020. 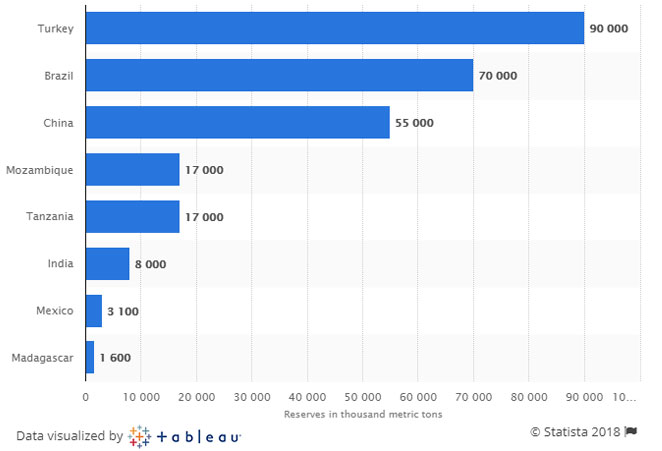 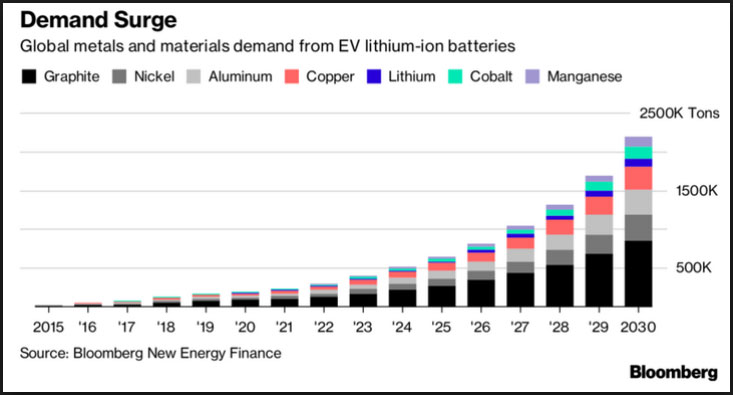 The Prices of Graphite is Improving With the Growing Demand 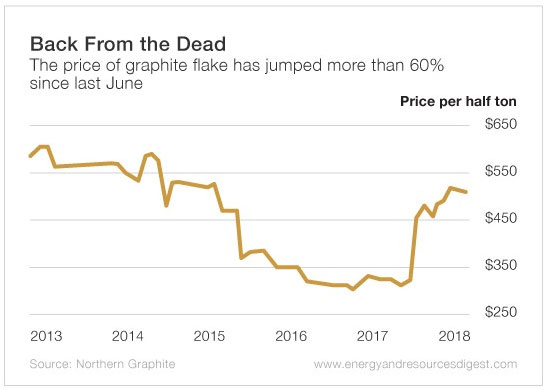 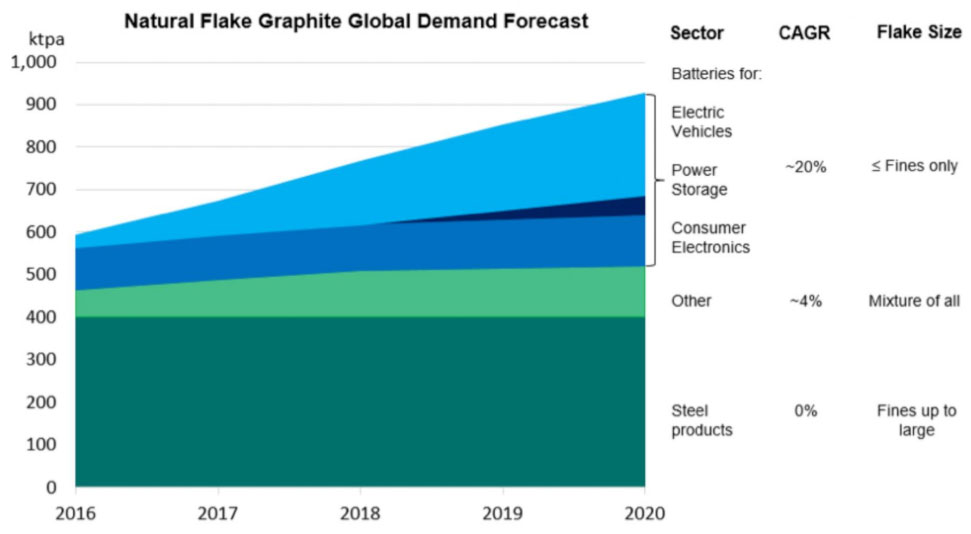 The demand for graphite for steel making is expected to plateau as China’s industrialisation phase of development comes to an end and the Chinese economy moves into its next phase of economic development.

Global policy, sales momentum and industry investment continue to build for the electric vehicle market. As a result, the lithium-ion battery market size is expected to grow to 500GWh in 2025, from 60GWh in 2015, and the impact on flake graphite will be significant.

Graphite has so many characteristics which corroborates its leadership position as the anode material of choice for commercial lithium-ion rechargeable batteries. Most importantly, graphite is inert, stable and safe - and we carry a lot more of it than we think.