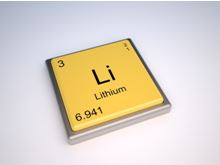 Lithium (chemical symbol: Li) is the lightest of all metals. It does not occur as a pure element in nature but is contained within mineral deposits or salts, including brine lakes and seawater. The contained concentration of lithium is generally low and there are only a limited number of resources where lithium can be economically extracted.

Lithium and its chemical compounds exhibit a broad range of beneficial properties including:

Lithium can be processed to form a variety of chemicals including lithium carbonate, lithium bromide, lithium chloride, butyl lithium and lithium hydroxide. The fastest growing and second largest market for lithium globally is for use in batteries.


Lithium use in Batteries:

Lithium has a number of uses but one of the most valuable is as a component of high energy-density rechargeable lithium-ion batteries. Because of concerns over carbon dioxide footprint and increasing hydrocarbon fuel cost (reduced supply), lithium may become even more important in large batteries for powering all-electric and hybrid vehicles. It would take 1.4 to 3.0 kilograms of lithium equivalent (7.5 to 16.0 kilograms of lithium carbonate) to support a 40-mile trip in an electric vehicle before requiring recharge. This could create a large demand for lithium.

There are two types of lithium batteries, 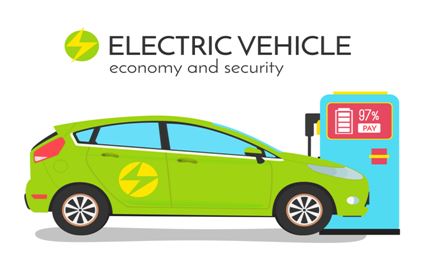 The electrification of vehicles is strongly supported by governments around the world due to increasing political and consumer focus on climate change and energy security. The introduction of mass produced passenger electric vehicles has the potential to significantly increase the future consumption of Lithium.

Lithium chemicals are also used in a variety of other applications including: 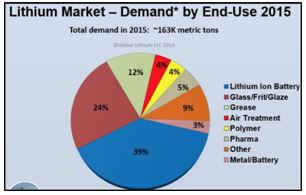 Glass: including container glass, flat glass, pharmaceutical glass, specialty glass and fiberglass. These glass products may be designed for durability or corrosion resistance or for the use at high temperatures where thermal shock resistance is important. The addition of lithium increases the glass melt rate, lowers viscosity and the melt temperature providing higher output energy savings and moulding benefits.

Ceramics: including ceramic bodies, frits glazes and heatproof ceramic cookware. Lithium lowers firing temperatures and thermal expansion and increases the strength of ceramic bodies. The addition of lithium to glazes improves viscosity for coating, as well as improving the glazes colour, strength and lustre. 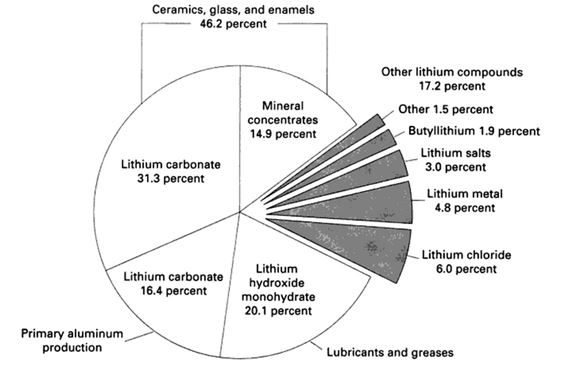 Lithium is also used in a variety of metallurgical applications, including:

Iron Castings: in the production of iron castings, such as engine blocks, lithium reduces the effect of veining, thereby reducing the number of defective casts 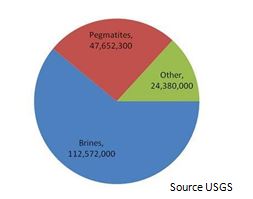 Global estimates suggest there are more than 30 million lithium resources, however, it is important to know that most deposits are not economically viable. For instance, some of the deposits, both brines and hard rock, may have high levels of impurities that make processing very costly, while others are in isolated parts of the world and would require high infrastructure expenditures, deeming them uneconomical. In the case of brines, the weather in some regions is not appropriate for the solar evaporation process. There are also many other factors, thus it is necessary to spend a significant amount of time and resources to determine the feasibility of these projects before considering them as viable resources (Euro Pacific-Canada, August 2013)

According to the United States Geological Survey (USGS) it is estimated that the global lithium reserves are in the 16 million tons. These estimates exclude lithium occurrences and resources that have not proven economic. 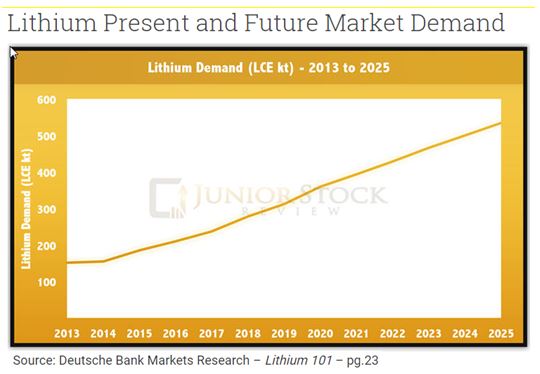 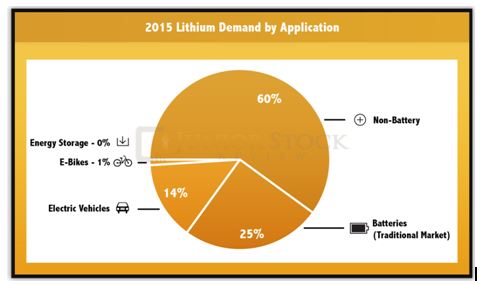 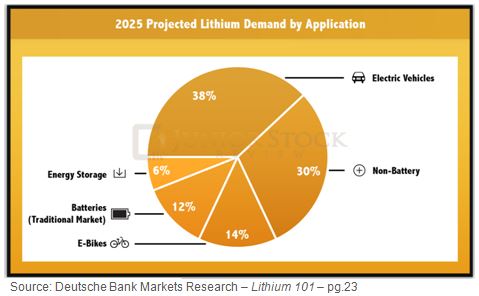 In this study below, we review the relevant geological features of the best characterized pegmatite

Pegmatites are commonly found throughout the world:


Lithium hard-rock recovery can be broken down into a few key steps:

1. crushing of the ore, then
2. concentration by froth floatation, followed by
3. hydrometallurgy and
4. precipitation from an aqueous solution. From here, depending on the application the manufacturer will create either
• Lithium hydroxide
• Lithium carbonate

which can be sent to factories to be manufactured into its final form.

When evaluating a hard-rock lithium deposit, the few key things to look for:


Images of Lithium after different processes: 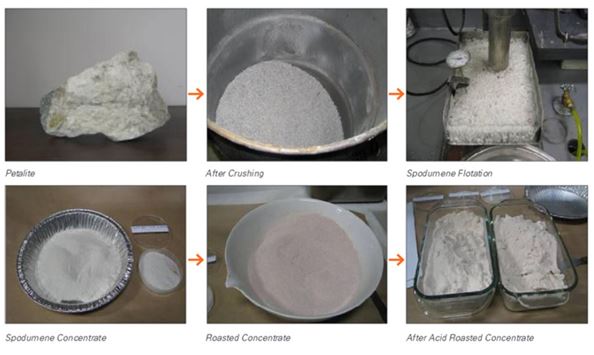 For the sake of this narrative we are excluding the Brine based deposits as they are located all over the world but only a small number of them are considered to be economical for the recovery of lithium, potash, boron and potassium.

The Great Transition, Part I: From Fossil Fuels to Renewable Energy: 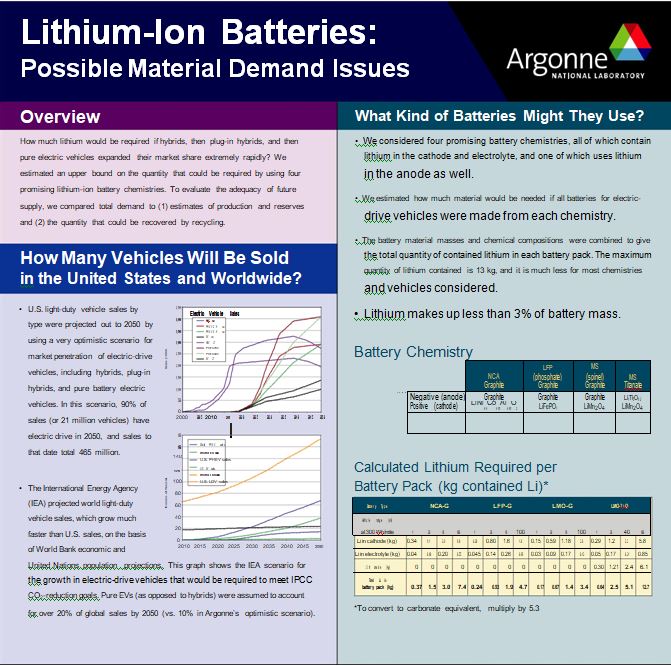 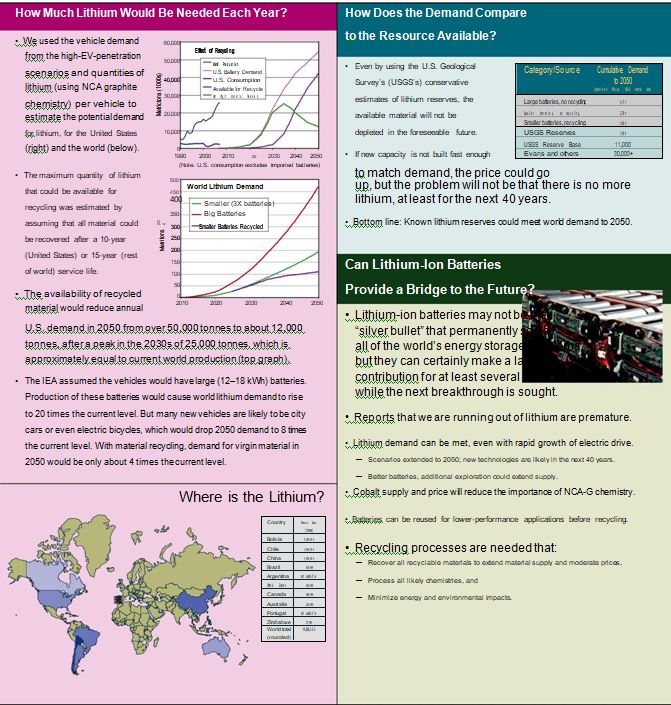