Mali, officially the Republic of Mali, is a landlocked country in West Africa, a region geologically identified with the West African craton.

Mali has embarked on economic liberalism since late 1980s

Intermin has acquired two world class Lithium mineral bearing permits in Faraba and Gouna with a combined area of 175 Sq Kms which comes in the Sikasso Region, about 200kms South-East of Mali Capitol ~ Bamako. They are well connected by National Highways RN7 & A5.

The neighbouring projects like Birimium – Goulamina Lithium Project reported JORC mineral resource of 32.9MT at 1.37%Li2O equivalent to 451,000 tonnes Li2O at 0.4% cutoff being listed on ASX and Kodal Minerals has 500 Sq Kms permit area across 5 licences are listed in the AIM (London Metal Exchange)

Faraba prospect is named after the village “FARABA” where the Intermin Prospect is located, near Toula village on RN7, which is 10 kilometers from Bougouni town; the prospect has good accessibility to the National Highway RN7 which is connecting Sikaso town with capital city of Bamako. Intermin prospect is within a short distance of 1.5 kilometers from the National Highway RN7. River ‘Baoule’ is running on the NW corner of the prospect at a distance of 800mts, which will be crucial for ore beneficiation.

Gouna Prospect is located in the southern region of Mali belonging to Sikasso region. Blakala and Gouna blocks are part of GOUNA Permit , both prospects can be accessible through all weather bitumen roads through Bougouni town (RN7)

The area is dominantly covered by granite. The granite is grey, coarse grained, non-foliated and contains quartz, feldspar, biotite, opaques and epidote. Dark green, coarse grained, grano-diorite occur as massive bodies and also as dike within in pegmatite. Aplites and pegmatites are also seen in the area. Intensive soil and lateritization is developed. Granites and Pegmatites are also lateritized.

History around the Prospect area

In the prospect areas, the pegmatite occurs in the form of veins, which are parallel and sub parallelin nature with few centimeter to 7 meters in width. The pegmatites contain quartz, Microcline Feldspar, albite, Muscovita Mica, smoky quartz, spodumene and opaques. The Sinsinkourou pegmatite field near Boughini stretches over 2 kms and are extending to a depth 200 mts as per the sonarem reports.

Intermin has developed a rapid and accelerated exploration aiming at advancing the project into exploitation in the short timeframe.

A total of 31 pits (1mx1mx1m) were dug in the area where pegmatites are exposed on 50m x 50m interval as area is mostly soil covered. Some of the pits exposed pegmatites at depth. During pitting / mapping some more pegmatites were located.

Trenching in the area was carried out to establish the width of the ore body and its interrelationship with other parallel pegmatites. A total of eight (8) trenches were made perpendicular to the strike of the pegmatites with a cumulative length of 106.40m 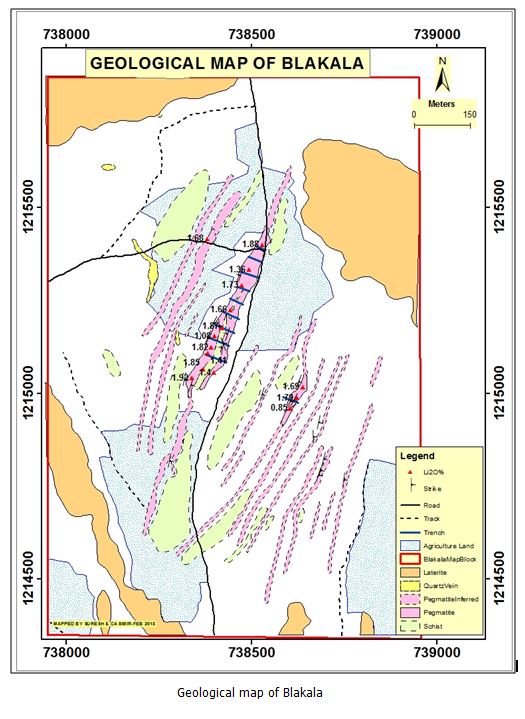 Blakala block consists of pegmatite with spodumene, schistose rocks, quartz vein and laterite as the main litholgical units. Schist is found to be the oldest litho units encountered in the Blakala block, followed by pegmatite. Quartz vein might be a later intrusion. Lateralization is prominent and found on the Northwest, North east and South west corners of the Blakala block; small laterite horizon is also found on the south eastern region of the block. Schists are of quartz mica schist variety predominantly comprised of mica and quartz minerals with exceptional occurrences of actinolite, which indicate the greens schist facies of metamorphism. Schist is grayish in color in most cases and shows brownish color due to weathering.